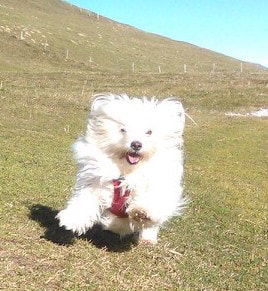 But, then it’s back to business:
As the "AT-Sensor-Coton" she is tireless. Her area of speciality is: Research in to smells/odours/fumes. This consists of detection and minute gathering of clues, followed by forensic investigation of suspect odours and smells, especially in mountain air and those hidden in the greenery: each and every blade of grass, suspect herb or flower is singled out, turned around and inside-out to determine foul-play, and who the offender was.
With her extra sensitive, highly specialised sensor she is able to detect invisible, even very low-level smells a mile away and relentlessly follows the trail until she has found the source of the offensive fume – and pounces. She then tries to get more information by digging a hole to eventually bury ‚it’. This is accompanied by the sensor giving off alarm signals like snorting and sneezing: after all, the odours are highly offensive and possibly toxic!
She’s also an excellent co-pilot and will guard whatever she feels needs guarding in her vehicle, fiercly. Especially from those pesky cows who smell bad, but keep moo-ing that they don’t really smell and insist that that kind of odour is as fragrant and healthy as fresh country air. Really! Dolly has a special look of disdain for that and does not comment, but looks the other way. And sneezes. 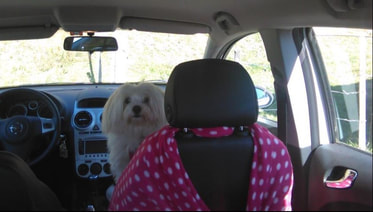 When she is off duty, she is a "Cushion Potato Coton". She is irresistibly attracted by cushions of all kinds. Dressed in white as she is, Dolly looks particularly pretty when she is photographed on, around, under or between soft cushions. She will re-arrange all cushions at regular intervals throughout the day to make the most comfy pile to recline in.
Then, she changes in to the "Black Foot Coton" who does not care at all about her pure white, beautiful coat. She gallops happily through dirty fields or the forest, leaving a clean, "ploughed" trail - with her belly full of mud, fir needles and small branches stuck to her back legs and bushy tail.

Talking of ploughing: she loves snow, and scoots, head first, through the powdery white stuff - we suspect she may have a Polar bear in her family tree. Winter and snow are lots of fun - except for snow that sticks. Then, often having to be carried home because she can’t walk anymore, she enjoys a warm foot bath to remove the snowballs stuck between her toes and on her short fuzzy legs.
She is a little clown who will make everybody smile in an instant; she has that thing about her that makes the day instantly better and brighter, and she makes sure we take plenty of breaks to go for walks.
​
With her sunny mood, Dolly is the happiest little dog with a big personality and is our bringer of luck and good tidings